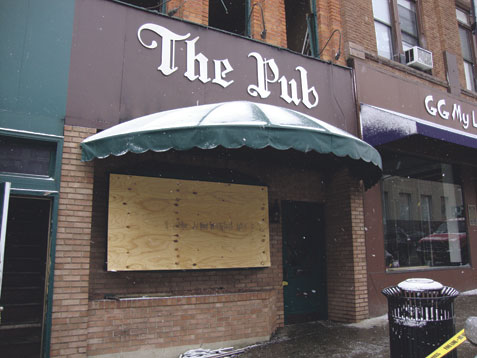 The Pub Renovations May Take Months, Lisciandro’s Could Reopen Saturday

It’s hard to imagine Jamestown without Lisciandro’s Restaurant and The Pub.

For many, the two establishments of 207 and 209 North Main St. are more than just familiar sights, but city landmarks, having welcomed patrons since 1954 and 1965 respectively.

Indeed, it is no wonder that so many expressed grief during Sunday evening’s fire, which tore through The Pub shortly before 7 p.m. and sent plumes of smoke out of both family-run businesses.

The Jamestown Fire Department responded to the scene after several passers-by reported seeing flames inside The Pub, which is not open on Sundays.

According to Lieutenant Andrew Finson, fire investigator for the Jamestown Fire Department, the fire was likely caused by a poor electrical connection near the entryway of The Pub.

“It’s usually resistive heating,” Finson said. “This time of year, we start getting more fires where higher loads through a connection can cause it to overload … you get resistive heating and it creates fires.” 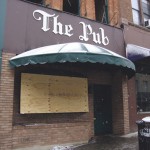 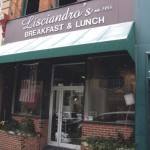 Finson added, however, that further inspections are still necessary to pinpoint an exact cause.

As for the damage, fire officials say The Pub experienced the brunt of it.

“There was heavy fire damage to the (pub) front, and the bar area,” Finson said. “If you move toward the rear, there was some heat and smoke damage … the fire did extend up through the upper floors but it didn’t cause much damage.”

Though the restaurant sustained only minor smoke damages, 65-year-old owner John Lisciandro was still reeling from the incident.

“(This fire) was the most devastating thing I’ve ever seen,” said Lisciandro, fighting back tears. “Just the thought of being here all these years, and that it could be wiped out like that in a couple of hours (is devastating).”

As reported by The Post-Journal in July 2004, Lisciandro, and his wife Carol, took the reins of the family business in 1975. Lisciandro’s father, Sam, had owned the business since 1954.

(This restaurant) is my whole life,” Lisciandro said. “I’ve been working here since I was 13 years old … washing dishes, bussing tables. My father had a heart attack when I was a senior, and that’s when I started to learn how to cook and I’ve been doing that ever since.”

Lisciandro, who values the family-centered nature of his restaurant, said he will do what he can to assist the renovating of The Pub next door, which is owned by his sister, Mary, and her husband Jim McCusker.

The Pub is also managed by Lisciandro’s son, Sam.

“(The Pub renovation) will take a couple months,” Lisciandro said. “The whole inside has got to be gutted out, all the way to the kitchen.”

Lisciandro said his restaurant should reopen by Saturday.

“Everything’s got soot … we got to clean all this and get the smell out,” Lisciandro said. “We also got to call the building inspector and electrician to make sure there’s no other problems.”

Vince DeJoy, director of development for Jamestown, said that grants will be sought to help rebuild these businesses, which he described as not only “iconic,” but as “beacons” with the capacity to bring Jamestown residents and ex-residents coming back to the community for more.