HomeAll postsThe Post-JournalRising From The Ashes

Rising From The Ashes 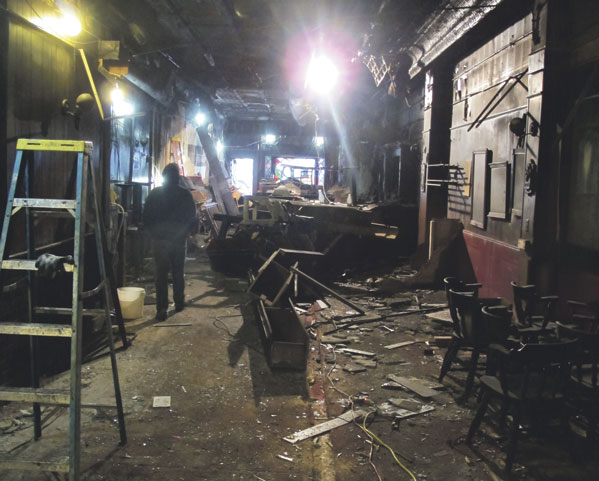 Renovation Process Begins At The Pub

It’s been more than a month since a poor electrical connection caused a fire to erupt at The Pub at 209 N. Main St.

Manager Sam Lisciandro stood looking over piles of interior remains on Friday, much of it blackened by the devastating blaze on Jan. 5.

However, hope is on the horizon.

Pictures of the process on The Pub’s Facebook page gained community support with more than 400 “likes” as of Friday afternoon.

Unfortunately, most of the woodwork must go.

“If you don’t take the bar out, the smell of the fire will come back,” Lisciandro said. “Right now, we’re just gutting it all and going from there.”

He also noted the ceiling of the premises, a drop-ceiling, has since been removed to reveal original tin above.

“That’s what saved the building, the tin ceiling,” Lisciandro said, further specifying that the fire moved from the front of the property to the back, damaging mostly everything in its path except for the kitchen.

Some of the landmark’s memorabilia was salvaged, and the rest will be replaced, Lisciandro said. 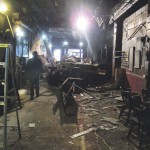 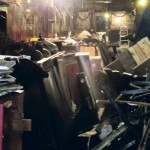 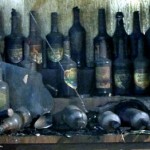 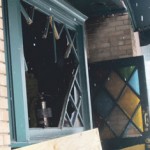 Interestingly, while workers were removing drywall, a mural was discovered behind the bar wall, close to the entrance.

It depicts women dressed in dated garments, posing in hats and gloves – a reminder of what existed before The Pub’s nearly 50-year stretch.

“Both places are considered one building, and when my dad bought the buildings in 1962, (the mural) was there,” said Mary McCusker, Pub co-owner. “I wish that could have been saved.”

According to the Fenton History Center, a variety store named McCrory’s 5 & 10 occupied the property from 1907-42, along with a photography studio named Camp Art Company (owned by Albert Camp) from 1907-15. A parlor named Delores’ Beauty Salon is also listed as a former business prior to Stuart’s Lady’s Clothes in 1942.

“(Stewart’s) was more a hat store, a milliner store with gloves and such,” said McCusker, who sat at Lisciandro’s Restaurant on Friday amongst several guests.

Lisciandro’s, which neighbors The Pub, also sustained damage from the fire but re-opened on Jan. 22.

On the bright side, Lisciandro’s, which is now owned by McCusker’s brother John Lisciandro and his wife Carol, is doing well.

“Our lives have been turned upside down, but maybe something good will come of it,” McCusker said. “They say everything happens for a reason. It’s kind of hard to accept that right now.”

Jamestown native Jim McCusker opened The Pub in 1965 after retiring from the NFL, with a goal to provide great service, food and drinks in a friendly atmosphere.

The Pub’s original menu consisted of four sandwiches, eventually expanding with an array of old-fashioned Italian menu items favorited by Pub fans, thanks to Mary McCusker after the two married in 1975.

“Everyone’s so happy to have Lisciandro’s back in business, and we’re hoping the same for The Pub too,” she said Friday.

It is still unclear when the renovation will be complete.