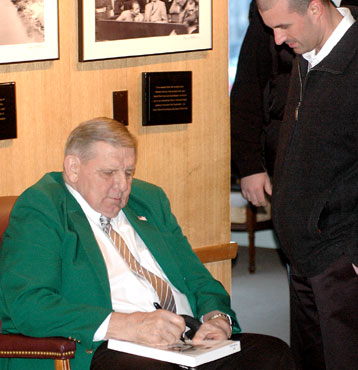 Jim McCusker is seen signing an autograph for Jamestown High school football coach Tom Langworthy at the Robert H. Jackson Center on Thursday night. McCusker signed autographs after discussing his football career at JHS, the University of Pittsburgh and in the NFL with the Chicago Cardinals, Philadelphia Eagles, Cleveland Browns and New York Jets. Films were shown of the Eagles’ 1961 and 1962 seasons.